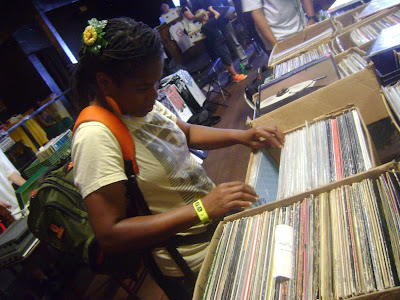 what's your fondest childhood memories?
Good question. Probably bumping in to Joe Montana and his family at Silverwood, scaring my youngest brother with a glow-in-the-dark ghost bag (the siblings helped), playing video games, watching cartoons, and making comics. The music was ingrained, too. Every now and then I attempt to find records based on those memories. Extremely hard to do when you don't know who they were.

how did you get into dj'ing?
A community party shut down too early, so we took the party back to a record shop, where my sister and I were encouraged to play for intoxicated hip hoppers. They'd encourage our random in-store selections and attempt cyphers. We were...19 at the time, and the encouragement was all we needed to sink future paychecks into a record stash (turntables would come later) and going to open turntable nights (aka whammy wednesdays).

if you could be someone else for a day,who would it be?
I would be one of those selfish billionaires so I could spend all that money on poverty, water issues, and houselessness among other things. Once the swap ended, they won't know what happened.

what dj/record collector do you admire and why?
A DJ I admire is DJ Nerstylist. His mixtapes are mostly awesome and are great inspirations for what to go digging for. Well, I also admire James Pants, however, I don't know if he's doing his thing anymore...

why should anyone come see you dj?
If anyone comes to see me DJ, it would be because of the music I play and the off-beat blending I experiment with. That, and I like to think I put in that good, intuitive background noise that makes everyone relax (if it's a house party).

what's the weirdest thing that has happened to you while dj'ing?
Slashed tires on all cars in the parking lot (except mine) at a bar show. I gave lots of rides that night and was grateful to do so.

what is your superpower?
Apparently it's the power of invisibility/stealth. If no one knows I'm in a room I can learn a lot of things. I still remember the time I was fully present and sitting in this big chair at my old job. There were two guys talking about a client briefing and they didn't see me in this chair! So when they acknowledged my presence (I got up from the chair) by asking if I knew about this client, I repeated everything they said and they didn't know I was even there listening to them. Their jaws dropped. I kept telling them, and they didn't believe me.

what else do you collect besides records?
comics, graphic novels, and books.  I also collect artsy-fartsy earrings every now and again. And notebooks, I guess.

what is your dream job?
I'm not gonna answer that one in that way. If I knew I couldn't fail and would never be in poverty or oppressed, I would say that I would A) found a school that incorporated comics into most aspects of learning (especially in Science, Math, Technology, and Engineering). This school would include critical pedagogy, social justice principles, and the sociological imagination in its teaching philosophy and a sort of "creative schools" framework/method. Maybe. I've read into this a lot so far, and I feel I should continue with the positive vibes. I would also be working on my ongoing comic series and putting out annual mix-tapes (or maybe bi-annual).

if you could meet anyone,living or dead,who would you meet?
I'd meet my grown little brother, in person, alive. It would have been awesome to see him in all his greatness and tallness.

what's the best gift you've ever received?
A $3000 grant from a university. I used that to go to Mexico City for two weeks, which was the greatest gift I could give to myself. Intangibly though, the greatest gift given to me was a question along the lines of "why haven't you followed your dreams?" since that kick-started my present journey.

what's the best record store you've ever been in?
Unified Groove Merchants (RIP) in Spokane. That's where most of my collection was built up from. And the music that was played was how I started buying records. Two Breaks of Four was one of my best finds from there thanks to off-beat tastes.

who is your role model and why?
My sister, who is my better half. She is a model of perseverance, resilience and sainthood in the face of adversity and struggle.

why is the world a better place with you in it?
That's a 1st world question right there! The world would probably be a better place without me in it since I have a huge (yet steadily shrinking) carbon footprint. The communities I'm in might be better places because I tend to regulate and encourage people to be open to possibilities they may have barred themselves from. I like to use my strengths to assist where I can (when I'm not feeling like some fickle outsider), and once I have my confidence and stamina up, I am capable of doing a lot.
Posted by darrell d at 10:47 AM