Any fan of rap music in the Phoenix metropolitan area between 1994-2007 knew the "TMC Presents" brand when they saw it. Tyree Michael Carter,or "Ty" to those closer to him,was the one who finally put Phoenix on the Hip-Hop tour circuit, establishing himself as a national level player in the process. I moved to Phoenix from Milwaukee in 1998 and met Ty immediately. Laid-back and soft spoken, he told me he was looking for a dj for a new rap group he was managing called Know Qwestion. I agreed to join his group and would later go on to become a regular dj and host for many TMC concerts,after-parties,and in-store artist appearances. I got a chance to reminisce with Ty about the "old days" and pick his brain about a classic time in hip-hop music. 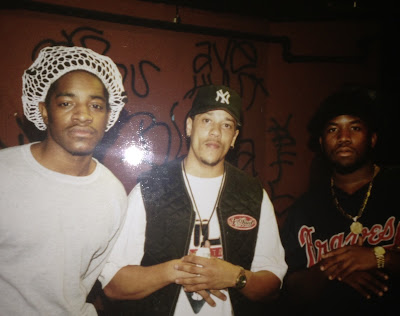 Darrell-How did you get started?

Ty-I got started in 90-91 doing backyard keg house parties. I soon got a reputation for throwing huge illegal warehouse parties with the Phunk Junkeez. It was a crazy time because those parties always got raided. I would have to unplug the generators and get out of there because they could always trace the generators back to me. The Phunk Junkeez would still be playing "dry" instruments while yelling "F*#@ THE POLICE" while 30 cops are walking across the field with flashlights. Insane! The Junkeez and i worked a LOT of shows throughout my career.
I then worked for Brad Loftland of Loftland Entertainment just long enough to learn the basics of the trade before i started TMC Presents in 1994. 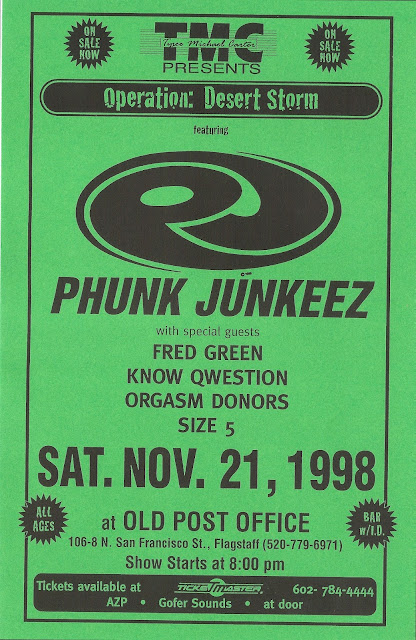 What was your first show?

My first official show was called Skate Phest with the Pharcyde and the Phunk Junkeez. That was january 1st 1994. That was the show that put me on the map. I worked with the Pharcyde more than any other group or artist in my 17 year career. Years later, The Plain Rap tour was the first show they did without Slimkid and Fatlip. That show was sold-out because the fans knew how timeless their music was. 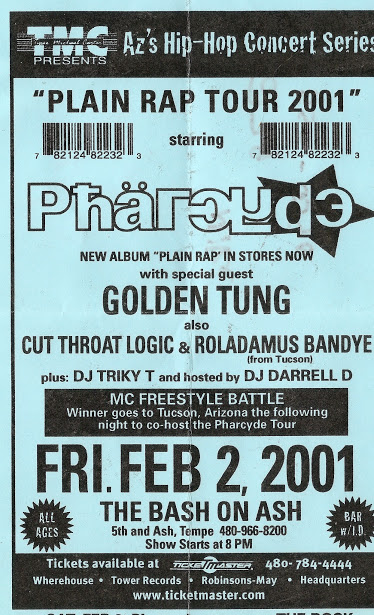 Back in 1998 you did a show with Big Pun and Xzibit. What do you remember about that show?

I did a small tour with those guys. In fact,that was the first show i did in Albuquerque,New Mexico. I chilled with Pun for 3 days. It was great but sad at the same time. To see all of that weight he gained. I remember sitting next to him on the tour bus. I was paying him and watching how heavy his breathing was. He even needed help getting dressed. It was sad.
Xzibit on the other hand was actually from Albuquerque and this was his first homecoming show. His entire family was backstage, his parents,cousins,everybody. It was a sold-out show at the Sunshine Theatre. 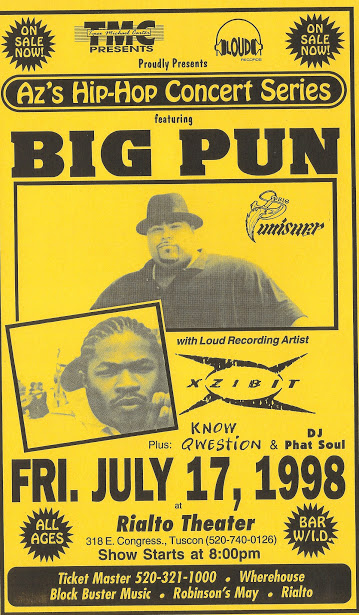 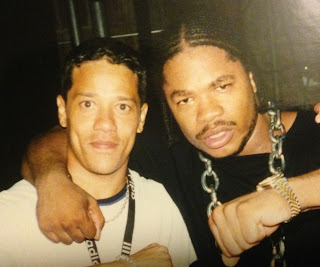 What are some other artists you've worked with?

What was it like working with the entire Hiero crew? 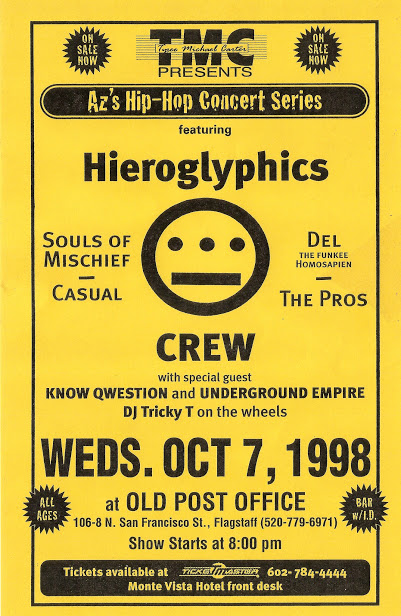 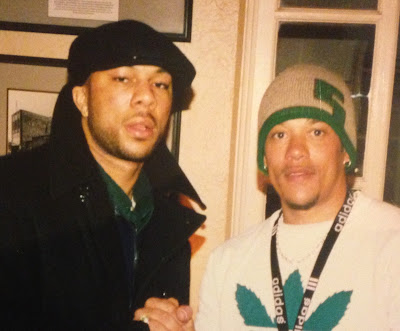 Tell me about the show with Nas.

Another sold-out show. That's the night Know Qwestion got jumped on stage. A riot broke out. I had to pay Nas in full before he would even get out of the van because of all the kaos. 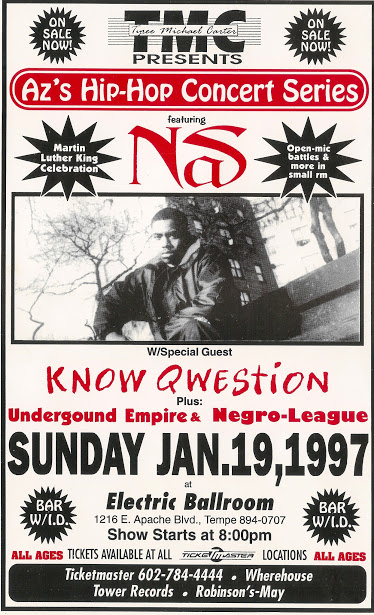 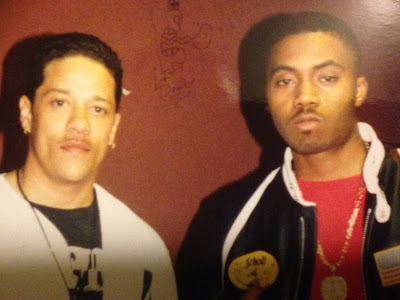 What about the Biggie show?

I brought Biggie to Club Rio in 1996. That was the only time he has ever been on Phoenix soil. He died a year later. After his performance, he went out into the crowd with no bodyguard, and shook every fans hand until the building was empty. He was a nice guy. 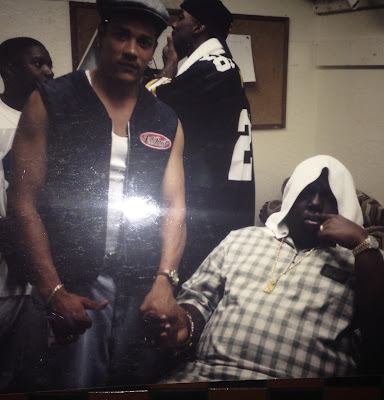 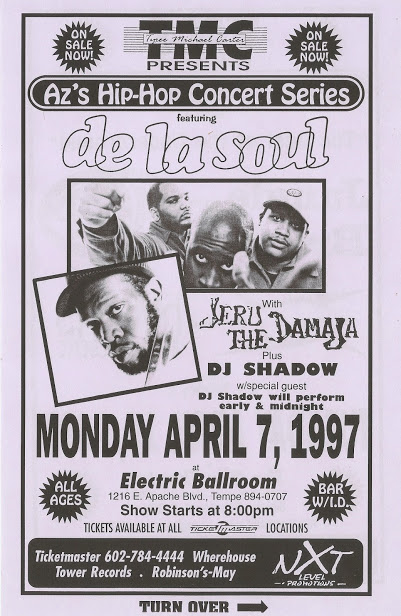 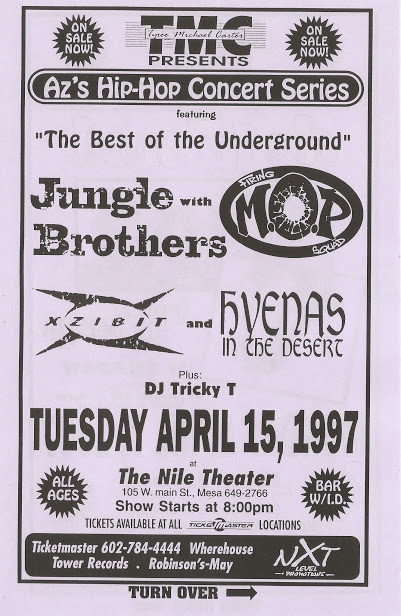 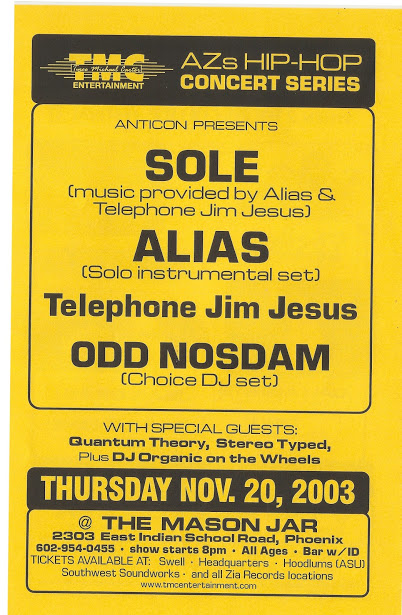 Back in 1997, before i moved to Phoenix, you did a show with the Wu-Tang Clan and the Alkaholiks. Tell me about that show.


Yeah, that was single-handedly the craziest night of my career. It was the biggest show i've ever done,the most money i've ever made on a show, it was the best and worst night at the same time. the Wu called me at 8am that morning from San Diego to ask how long it would take to fly to Phoenix and how long it would take to drive here. I didn't hear from them again until 10 minutes before showtime. The crowd was restless because it had been 2 hours since the Liks finished their performance. I was just about to write a cancellation speech to 7500 people. I was standing outside in the back when i looked over and saw like 8 SUV's pulling up. The doors opened, huge puffs of smoke came pouring out, then out comes the Clan! I was almost forced to cancel the show.

Working with the WU was always crazy. I remember doing a Raekwon show and it was showtime but Rae was still at the hotel. The club is going crazy at this point. I called Derek,my runner, and told him to bang on Raekwon's hotel door and tell him to get his *#@! to the venue! Derek knocks on the door and Rae opens it wearing just some boxers with a blunt in his mouth and his hair half braided with some chic in the back waiting to braid the other half. "we need you on stage right now", Derek tells him. Rae replies,"i'll get there when i get there", then shuts the door.  Fans love them but they were always drama. 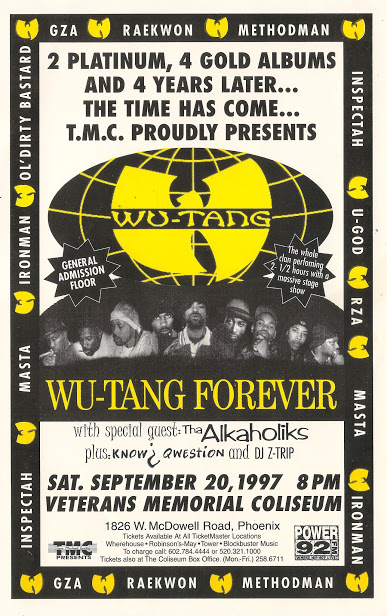 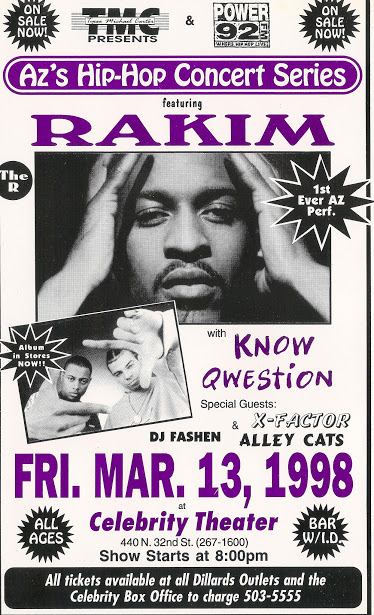 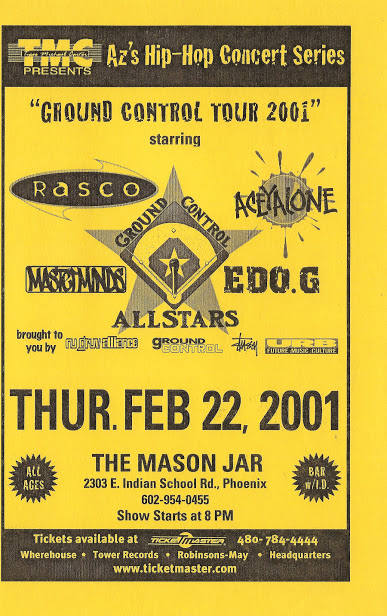 So what happened to TMC?

There's not a lot of good rap music or quality acts like there use to be. I'm not going to invest money on these one-hit wonders of today. I gracefully bowed out in 2007 and i haven't seen that void filled since.