Due to the overwhelming response from a previous post I did about Tyree Michael Carter of TMC Presents, I felt moved to continue this incredible story of a guy who loves hip-hop and exposed Arizona to high quality rap tours. You can read part one about TMC Presents here. TMC left a legacy of solid rap shows. Some never to be repeated like Gang Starr, Big Pun, Run-DMC, Eyedea & Abilities, Boot Camp Click, B.I.G., A Tribe Called Quest, & the Wu-Tang Clan. Ty was kind enough to again acknowledge the fans and share additional experiences about his career as a rap promoter.

D-Last time we talked, I didn't get a chance to ask you about some of the local artists you've help expose by having them open for some of your shows. Why did you chose to use local talent?
T-I didn't work with a ton of locals on many of the major tours but I did work with them often. I did this for 2 reasons,...to help sell the show and to expose artists that had a lot of talent and professionalism. I just wanted to spotlight the local scene.

D- Who were some of these artists?
T- Groups like Illegal Substance, They had a lot of fans and always had a lot of fun. Society Of The Invisibles, they were hustlers. I may sound bias saying PokaFace with him being my artist at the time but I could always count on his professionalism. Cut Throat Logic. They had hustle & professionalism and a huge following. Golden Tongue did too. They were very talented. Let's see..... There was the League, The Brothers Grimm, SuperMarket, Know Qwestion, Dislocated Styles, Drunkin Immortals, Heaven Sent, Grime, Nasty Boy Click, The Associates, Dj Element........I worked with a lot of AZ artists.


D-I remember that Battle of  the local bands type show you did where Cut Throat and Golden Tongue were battling for that top spot.
T-Yeah,that was an idea I had where I chose a handful of groups to come out and perform and whoever brought the most people into the venue, they would go on a 3 city tour with the Pharcyde. Golden Tongue won by maybe 5 or 10 people. Both of those groups had a large loyal fanbase. It was a great idea, the house was packed, and we all had a good time. 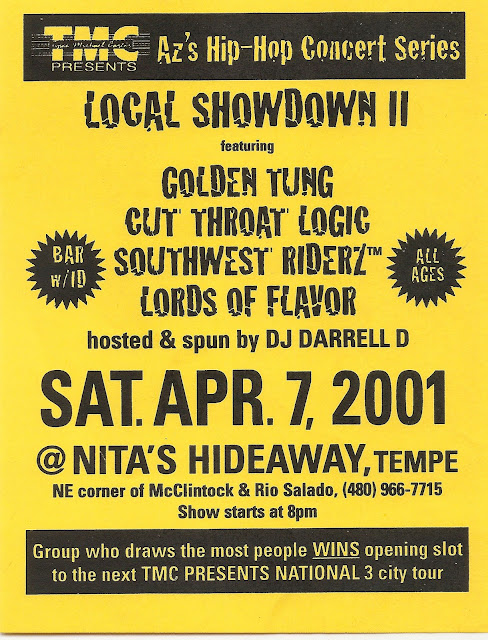 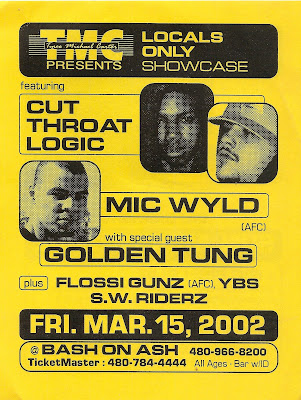 D-I moved to Phoenix in 1998. As a Dj I noticed you worked a lot with Dj Fashen, Z-Trip, Radar,& Tricky T. These guys have moved on to do some big things.
T-That's right. I'm proud to have played a part in the careers of those guys.

D-You've brought some serious legends to Az. Some we will never see again like my favorite rap group of all time RUN-DMC & Jam Master Jay.
T-I brought Run-Dmc to the second annual "Freak Show". There were 4 Freak Show concerts. I created them with the Phunk Junkeez in '95. The first show had the Pharcyde and Del. The Pharcyde had just lost Fatlip. I remember Del got messed up on shrooms and freestyled his entire show. It was terrible. I caught a lot of heat for that one. It was trashy, he was terrible. Somewhere around here I have a picture of him with his pants down passed out on the floor. 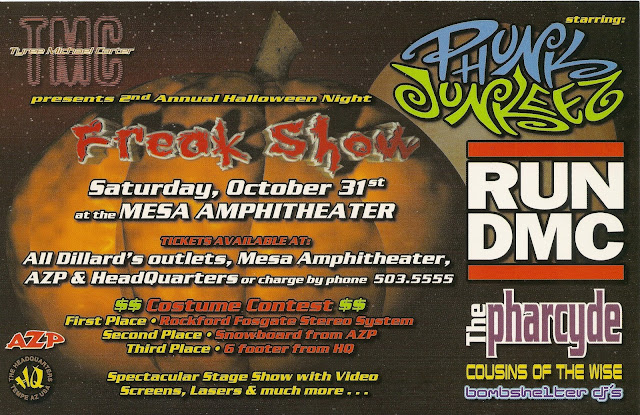 D-Another was Gang Starr.
T-Rest In Peace Guru. I was in Germany when I heard he passed. I saw it on the cover of a German hip-hop magazine. Guru and I were on a first name basis, and he loved my mom. I used to hang out with him in Vegas at the Magic Shows. I did his Jazzmatazz tour too. The first Gang Starr show was at the Roxy. 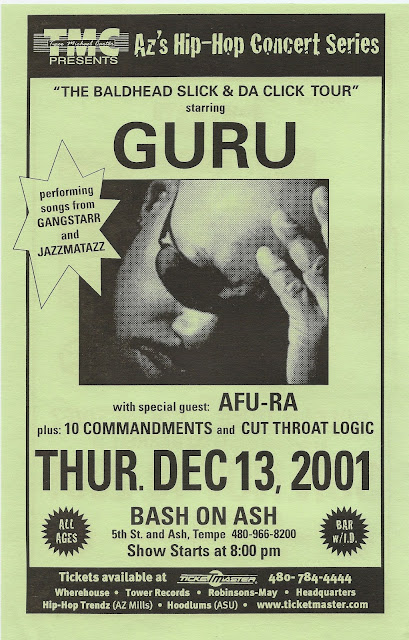 D-You mentioned your mom, Oddy Carter. I actually plan on doing a seperate story on her but I was wondering if you could tell me what type of role she played in your career.
T-My moms......(sign)  Rest In Peace. I love her with all of my fiber. She came in after I was doing the underground Phunk Junkeez shows. In fact,the last illegal show we did, I had this big huge guy working the door that I didn't know too well. We caught him stealing $300 so that was the end of that. A year later I did the Skate Phest with the Phunk Junkeez, the Pharcyde, & Face to Face which was a punk band. Now I got moms at the door. If you can't trust moms,who can you trust 'knowwhatimean'? And me being the love of her life, she naturally fell in love with the culture of hip hop. I sat back and watched all these artists fall in love with her. Black Thought, Ice Cube, Guru, Hiero, Jeru, they all loved her. When they would come back to town a year later, the bus would pull up, I would give everybody daps, and the first question would be,"Is mom dukes gonna be here tonight?".  The son/mother combo was very unique. This German woman with the heavy accent who's got her son's back with the money.  In addition to the major groups, the local scene fell in love with her as well. After working with me for 15 years, she went on to start her own promotion company called Adda2udpromotions. She worked with hundreds of local artists over the next 10 years who had no other outlet for exposure.

D-Most of your shows were pretty packed. I remember the Pharcyde at the Bash On Ash. I was hosting that night and it was sold out with 200 more people outside who couldn't get in. It was like sardines in that place.
T-Those nights killed me when I couldn't get everybody in the door. TMC had a reputation with club owners all over the valley  for breaking every capacity record. Every venue that came and went during the TMC era, at some point we over-sold it and brought in more people than any other acts. Several shows at the Roxy was like that, Electric Ballroom, Club Rio with Outkast & the Roots, nobody could touch us.

D-I never get tired of seeing the Roots perform. They never disappoint.
T-One of my favorite shows was the Roots, the Fugees, & Goodie Mob at the Electric Ballroom. They all had live bands that night. Everyone knows the Roots and the Fugees have live bands but no one was expecting the Goodie Mob to have a live band. I booked it right when the Fugees dropped "Fu-Gee-La". Then they dropped "Killing Me Softly" which was a HUGE hit and then the Score Lp dropped. I booked this show through the William Morris Agency and I got it pretty cheap. After these singles blew up they tried to renegotiate the deal. I declined(lol). The venue held 1300-1400 people and we packed 2000 in there. Like I said, I had a rep for overselling shows. You couldn't move in that place. It was nuts. Watching Goodie Mob do "Cell Therapy" with a live band was crazy! That was '96 I think.

D-You told me a crazy Wu-Tang story the last time we talked. Did you ever have any other close calls like that?
T-Yes. We also talked about Big Pun last time and I had a similar experience with him. It was the first rap show in Albuquerque, New Mexico. Big Pun was late getting to the show. They were driving in from Phoenix. It was a sold out show, over capacity as usual. We had 2 hours of dead-time after Xzibit performed. The fire marshall showed up and wanted to shut the show down since Pun was not there yet. They kept calling me saying they were 15 minutes away and 30-40 minutes would pass. You could see the 40 highway from the Sunshine Theatre and I saw the tour bus approaching the exit to the venue. Finally Pun and the Terror Squad rush the stage and rips it. Halfway through their set they stopped the show, brought me on stage, and apologized & told the crowd that if it wasn't for me they wouldn't be there. We did Phoenix, Tucson, & Albuquerque.

But speaking of that Wu-Tang show....I remember them having a crazy rider which meant we had to bring in these chefs that prepared all this fancy seafood, filet mignon, all types of crazy dishes. Remember, Wu-tang showed up 2 hours late so all that food went to waste. I spent $1000 on catering that night.

Vegan artists are also hard to accommodate. The Fugees, the Roots,... lots of live bands were vegans.

D-Know Qwestion performed at those Big Pun shows and I was their Dj and I had a little drama with one of Xzibit's guys at the Tucson show. Nothing too too serious, I just hate when people are difficult to work with.  You ever deal with any of that?
T- KRS-ONE ran his operation with his wife. She was a very difficult person to deal with. I would have to drive to the hotel, meet them in the lobby, and pay him his money before he would even come to the venue. They could be real headaches sometimes. 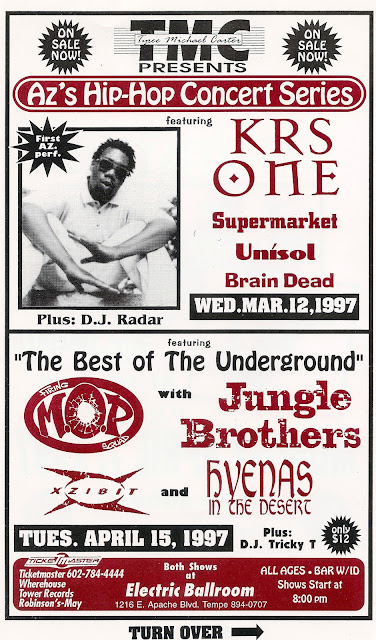 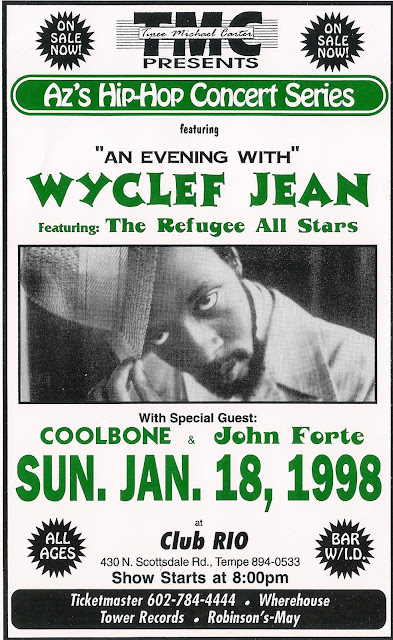 D-Yeah, I Dj'ed for Krs-One 3 times and you're right. He can sometimes be hard to work with. Most of the time I had a blast rocking shows with him. None of those were TMC shows, but I did Dj for Raekwon at one of your shows. He had the Cream Team with him at the Sunshine Theatre in Albuquerque. They beat up the house dj and his buddy pretty bad,I don't remember why. They left in an ambulance.
T- Here's another crazy experience I had. I brought all of the Cash Money Millionaires to town. I think Wayne was like 16. It was at the Web Theatre downtown. They were only open for a short time. When they got here their manager called me and wanted some show tickets. I told him to just give me a guess list, but no, he wanted 50 physical tickets. So I give him 50 complimentary tickets and sure enough while the 10 Commandments were on stage, I'm in the box office and I see people walking up with these comp tickets. I'm like,"where'd you get these"? I walk out to the parking lot and I see someone from Cash Money's camp selling my comp tickets. They were just trying to make some extra money on the side. The dressing rooms at the Web were in the basement and they had a big entourage with them. 40-50 people were with them. Even Mike Tyson was down there. When I paid the manager, It was less then we agreed on, like maybe a few grand. When he asked why, I told him it was because his boy was outside selling the comp tickets they were given. He went and got the dude and was like,"Is this him?" Yep. They sent him home on the Greyhound. They gave me major respect for stepping to them and not getting played out cause I could have gotten killed refusing to pay these fools. I knew the manager was in on it because he was the one I gave the tickets to. He tried to act like he was mad at the dude. He probably didn't even send the guy home at all. 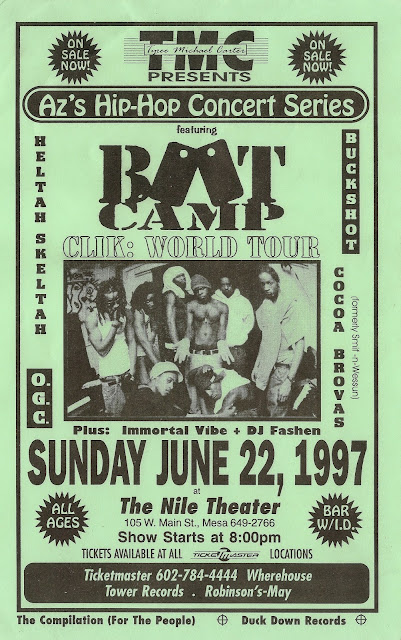 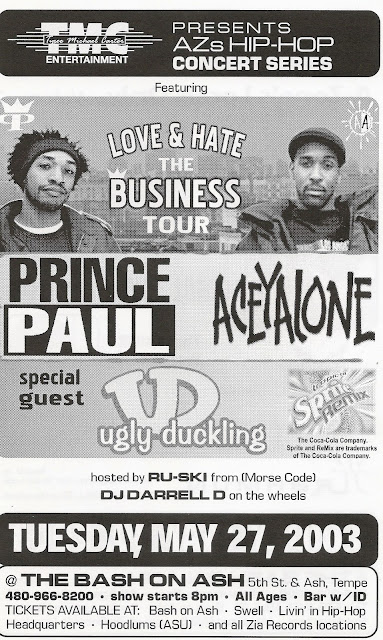 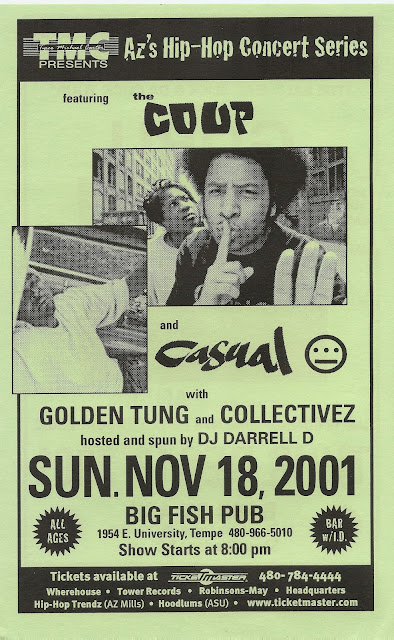 D-When the Coup played the Big Fish Pub, they had one of the best bands I have ever heard. I remember Casual standing outside before he took the stage high out of his mind. Casual is a cool dude. In fact, all of Hiero are the nicest, modest, most down to earth cats I have ever met in rap.
T-Some of the best times of my career was working with Hiero. So many dope personalities. They were like family. 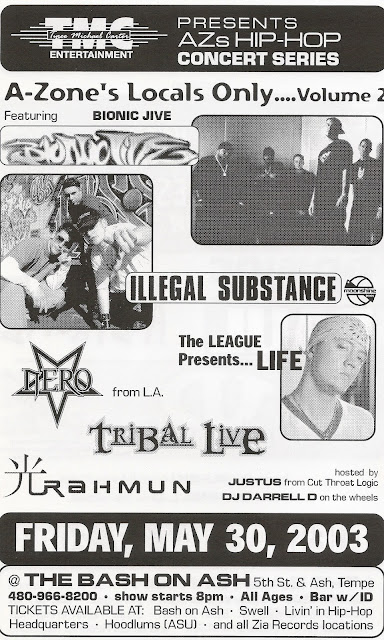 D-You the man Ty. I had a lot of fun rockin with TMC. Met a lot of cool people. I got tight with cats like Motion Man, Fatlip, Pep Love, Planet Asia,the list goes on, because of  TMC.
T-Thanks for the love D.