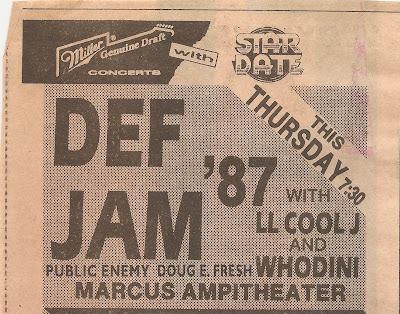 Solid tours with heavy line-up's are all but gone. One of the coolest things about growing up in the 80's was knowing you were in for an incredible night whenever a rap show rolled into town. The Def Jam Tour was as solid as they come. LL Cool J had just released Bigger And Deffer and was the hottest rapper on the planet. The Marcus Amphitheatre in Milwaukee, which holds 25,000 people, was at capacity. LL appeared out of the tapedeck of a giant boombox which landed on the stage and was accompanied by not just his hypeman, E-Love and Dj Cut Creator, but also by Dj Bobcat, who along with the rest of the L.A. Posse, produced the Bigger And Deffer Lp. I've seen LL live in concert many many times and trust me, this was LL in his prime!


Just watching these youtube videos gives me the chills. Rap was taking over the world during the mid to late 80's and there was no stopping it.
This was the first time Public Enemy performed in Milwaukee. They had just released their first Lp,Yo! Bum Rush The Show and not many people knew who they were. I'll never forget the S1W's carrying the fake UZI's and Terminator X on the turntables.  Doug E. Fresh continued to show everyone why he is "The Greatest Entertainer", and Whodini & Grandmaster Dee had an explosive show as well. They don't make rappers like this anymore.