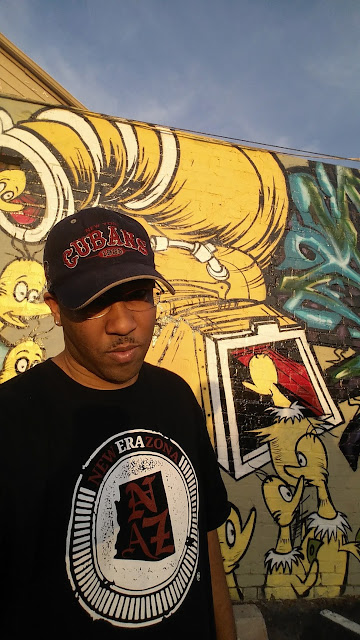 How did you get into dj'ing?
I was the youngest of 4 brothers and 2 sisters.  My older brother Stevie (The second youngest brother), was a DJ in high school.  He did a lot of local gigs and house parties around my hometown, Chester, PA. I wanted to be like my brother so much.  We were inseparable.  I was 4 years old when I was able to hook up his DJ equipment without his help or permission.  I watched EVERYTHING my brother did – from hyping the crowd to watching what records he would pull from the crates.  He would even have me cue up records at the parties sometime.  He went on to graduate high school and then enlisted into the Navy when I was 6.  I was so heartbroken that he left me.  He even sold his equipment and records! Hahaha.  My folks had to literally take me to a shrink because of the withdrawal I went through.  So, while he was in the Navy, I was forced to play records on my mom’s old Panasonic turntable in the living room.

What are your fondest childhood memories?
I was actually learning to DJ before I could even say the alphabet.  I remember falling in love with the record label artwork.  I remember looking at certain designs and patterns on the actual records and knowing what the music was before I could even read the credits on the records - and how the grooves were laid out on the vinyl.  I remember hearing my brother play Planet Rock and Rappers Delight.  To me, there was nothing like it.  My folks didn’t exactly hate the new Hip-Hop craze, but they didn’t really respect it as anything other than a passing fad.  Hip-Hop and video games pretty much were born at the same time.  And they had so many parallels.  Being in the arcades at the mall, when games still cost a quarter, with a Walkman on was something that was new to this world.  It was a true Golden Age.

What was the first record you ever bought?
I think it was my 11th birthday.  My older sister bought me Spoonie Gee – The Godfather Of Rap,  Kool Moe Dee – How Ya Like Me Now, and M.A.A.R.S – Pump Up The Volume.  She told me right then and there to get my record collection going.  So I believe the first record I actually paid for out of my allowance money was ‘Yo! Bum Rush The Show’ by Public Enemy.

What dj/record collector do you admire and why?
I ride for DJ Jazzy Jeff for life.  And only 15% percent of my admiration for that man comes from Philly bias lol.  The thing about that man that I admire is his extensive music knowledge – and that’s BESIDES his skills as a DJ and turntablist.  To be one from the pioneering era and to be able to transcend and kill it the way he does to this day??  Jeff is full of surprises, too. His sets are full of the most musically balanced stuff.  He is a big reason that I go back and research other genres, past and present.  There are many levels that have been brought out of me as a music lover through my life.

What's the weirdest thing that has happened to you while dj'ing?
Sheesh…that’s a good one.  I DJed a couple of hedonistic events in San Francisco before.  The crowd had people of all ages and from all kinds of walks of life in the spot.   Let’s just say the difference between DJing for a hedonistic event and DJing in a strip club is that you probably wouldn’t mind the strip club sights as much LOL

If you could meet anyone, living or dead, who would you meet?
I think I would like to meet Aaron McGruder for a day.

What's your favorite soul/R & B album? why?
It’s a hard one but I think I’m gonna have to go with Stevie Wonder’s Innervisions for now.  You would think man with no eyesight shouldn’t write, produce, and perform music that displays such descriptive imagery – front to back.  The older I get, the more that record fascinates me.

If you could be someone else for a day, who would it be?
As a music producer, I wouldn’t mind being Madlib if we are playing that game.  I always felt that Madlib (Back in his Stones Throw days) had the best arrangement for life as a producer/artist.  All this man does is eat, sleeps, smokes, and makes the music HE wants to make without having to worry about a thing. The good people at Stones Throw handled the rest of the business…sample clearances, artwork, promo, etc.  The way Madlib put it, they just told him to do what he does.  I don’t know of any other professional musician / DJ / producer who had it better than that at ANY level while maintaining a following.

Who is your role model and why?
If you are an educator that has a selfless drive to make a difference in today’s school system, I salute you.  I have great admiration for the men and women that value the lives of our youth unlike the justice system that looks to eat them alive.

What was your greatest Dj moment?
I’m blessed to be able to say I have numerous great DJ moments. From making it to Japan and other distant places to play for those people as well as learn about their cultures.  I try to incorporate elements of different cultures in my sets. I can consider being a provider to some wedding ceremonies I’ve done was a great honor as well.  Helping to create a great experience for people musically was the reason why I wanted to become a DJ in the first place – because of how music in context made me feel.

What's next for DN3?
There will be a few musical projects in the near future with coming out with my production.  Of course, I’m always playing a balancing act of producing and DJing.  You can still catch my Friday Lunchbox mixes and radio show, Off The Cuff, on www.radiosupa.com every week.  Please check out my website www.djdn3.com for any other updates I might sneak in.  Speaking of the Friday Lunchbox Mix show, I am always looking to feature guest DJ mixes and it would be an honor to feature DJ Darrell D one of these Fridays.  I’m just sayin. Thank you! 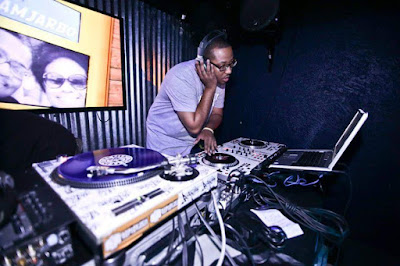