"I was a fan before I was the man."-Dj Scratch

I've always enjoyed meeting artists that I admire from Hip Hop and when possible requesting an autograph from those artists to capture the moment.  I've collected quite a few autographs over the years and wanted to share one of my favorite signed album covers with you. I've taken this Wild Style Lp all over the country with me to collect as many signatures from those that appeared in the movie. Most of these signatures took place in New York with some from Las Vegas, Phoenix, L.A. San Diego, and Boston. 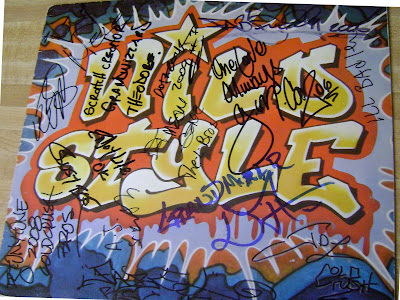 In 2016 I decided to leave this record behind in Phoenix while I traveled to New York, (something I NEVER do), thinking what were my chances of meeting someone I could add to it. So i'm in the Bronx at the Tools Of War Crotona Park Jams and I run into this guy…..