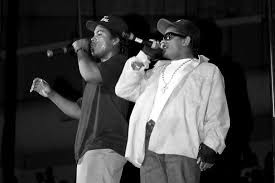 I remember when the "Dope Man" 12" dropped back in 1987, it was like nothing anyone had ever heard in rap music at that point. Lot's of street violence, guns, and lot's of cussing.  I remember letting my high school english teacher listen to it on my walkman and she was disgusted. Two years later N.W.A. is huge and embarking on their first major concert tour. This was the same tour featured in the Straight Outta Compton movie.  When the tour arrived in my hometown of Milwaukee, the Mecca Arena was packed as usual with a full line-up.
Highlights of the tour included a young T.K Kirkland opening the show with hilarious urban stand-up comedy followed by a then completely unknown D.O.C. The D.O.C. commanded everyone to stand up, which most of the 20,000 in attendance did, to be followed by "It's Funky Enough". By the second verse, everyone was shouting "IT'S GETTIN FUNKAYYY, IT'S GETTIN FUNKAYY"! Instant classic! He performed "Mind Blowin" next and then he was out!
During JJ Fads set there was an incredible turntable solo by Dj Train (R.I.P.) and on the wheels for Kwame was none other than Dj Tat Money from Philly who also featured a solo.
After the first few acts, fans were super anxious to see Too Short and began to chant "TOO SHORT,  TOO SHORT,  TOO SHORT!" When he took the stage he was wearing the biggest, fattest, gold rope I have every seen. It was huge! After his set everyone again began to shout, "TOO SHORT  TOO SHORT  TOO SHORT". I have never seen that before.
N.W.A. appeared in various stages. First, Dj Yella came out and did a lot of scratchin. Dr. Dre and Ren followed and performed, "Compton's N Tha House","If It Ain't Ruff", and "Express Yourself". Ice Cube appeared next to perform, "Gangsta Gangsta" and "I Ain't Tha 1". Eazy appeared last to do all of his solo hits and then they did all the songs that they appear on together. The stage was set up to look like an alley or street corner somewhere in the hood with garbage cans, wire fences, trash, and police tape. This line-up was crazy and you don't see shows like this anymore.