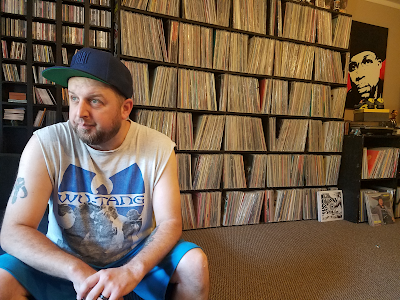 It's pretty hard to find a vinyl collector who only collects vinyl. In fact, you might find several different collections among those who dig for "black gold". I have been known to rock lunch boxes, pez dispensers, trading cards, shelltoes, comic books, you name it, but that's another post. Today, it's all about Dj Drunk Jeff. This O.G. has been in the game pretty much as long as the game has been around. He took some time from his busy schedule as a husband, father, & beer connoisseur to let us check out some other things he collects in addition to records. 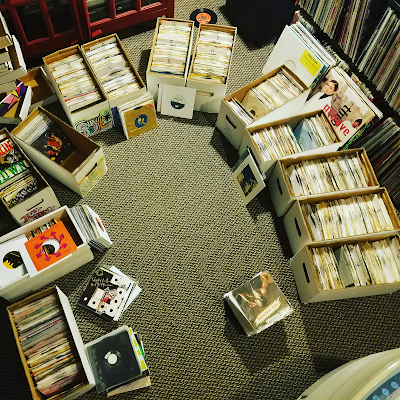 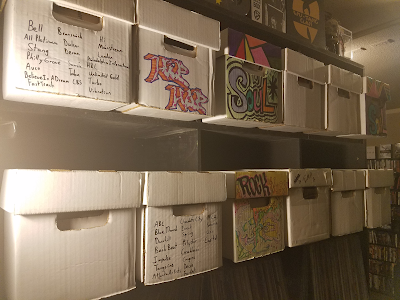 Darrell D - Since it starts with records, let's start there. I noticed you have a lot of  45's. What are some of your favorites?

Drunk Jeff - Sisters Love "Give Me Your Love", it's got a huge break in the middle of the song. Ray Bryant "Up Above The Rock", it's a funky jazz song with a huge break. Carlos Malcolm "Bustin Outta The Ghetto", it's on AJP label, Ahmad Jamal productions. 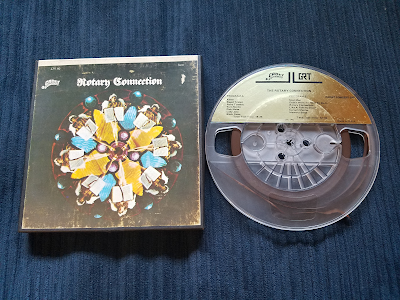 DD - You're a Dj and vinyl collector, why did you get into collecting things outside of records?

DJ - I didn't set out to collect anything in particular. Some things I had to have like the Public Enemy action figures and the Boba Fett figure. The Amy Winehouse bobble head fell in my lap and so did the Outkast Jones soda.  Some stuff takes me back to being a kid. I had all of the Star Wars stuff and the G.I. Joes from day one. To have some of this stuff today takes me back. Anything Hip-Hop is worth collecting and I have to have it. I don't seek out toys. I see stuff on social media or hear about what's coming out and i'll jump on it, like the P.E. dolls. I saw the P.E. watch advertised on social media. They were limited and signed by Chuck D. The Star Wars At-At is an O.G. that I tracked down. I worked with a guy who knew a guy who was a pop culture dealer. This guy tracks things down and sells them. G.I. Joes, Transformers, Star Wars, you name it, this guys finds it. He would even find broken or incomplete pieces and put them together. This dude had some crazy stuff. 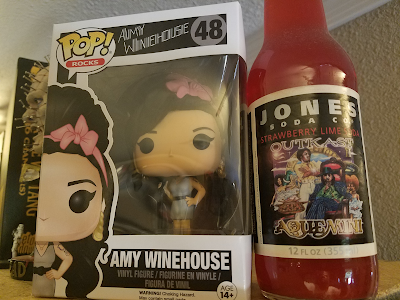 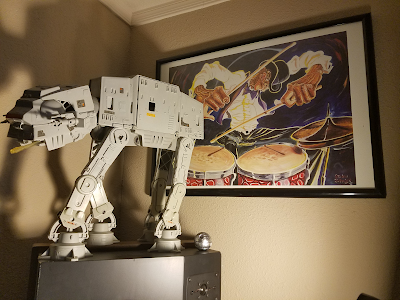 DD - Your movie posters are dope! What's the story with those?
DJ - I got a decent collection of movies. I used to have a lot more but I got rid of a lot of stuff. I got some crazy blaxploitation  joints, B-movies, horror flicks. I've never seen Jurassic Park in my life but I can tell you about all the classic stuff, so when I came across the posters, I jumped at the chance to own them.
DD - What are some movies people may be surprised are in your collection?
DJ - Nekromantik , which is a German film from 1987 about a dude who cleans up dead bodies. He brings one home and his girlfriend falls in love with it, that whole sleeping with the dead thing.
DD - (Laughing)Man, I think it's time for me to go!
(Both laughing!)
DJ - Other then the Star Wars, my other posters are O.G.s. 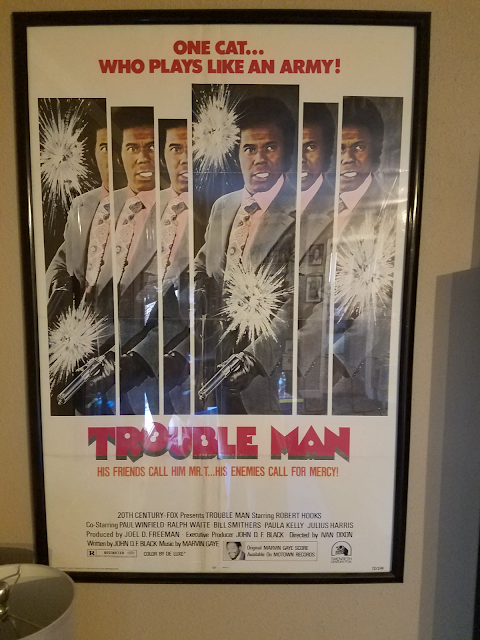 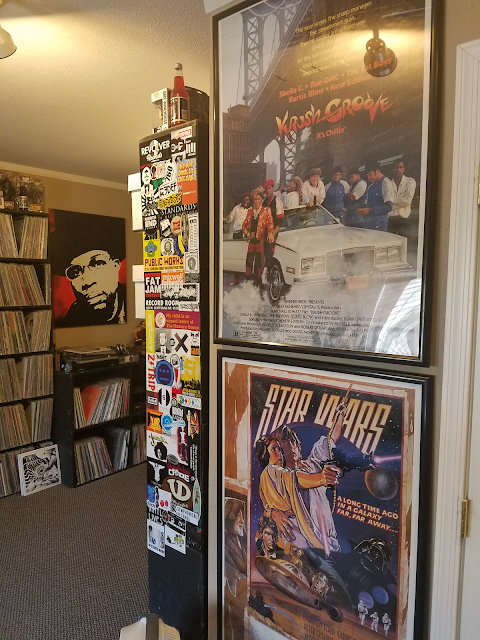 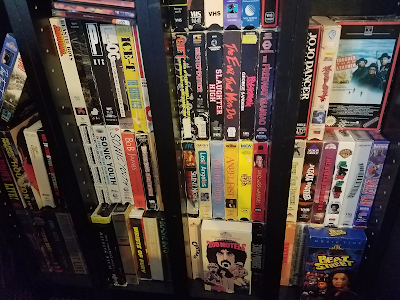 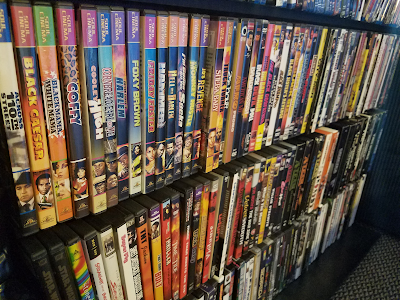 DD - I'm still looking for that Dolemite record. Where did you find your copy?
DJ - I found it in Bakersfielf at a bookstore called Tommy's who had a massive amount of records. I paid one dollar for it. Years later I went to see him perform with Blowfly at the Rhythm Room in Phoenix. During his set, while in the middle of a song, he spotted the record, stopped singing, autographed it while everyone watched, then proceeded to finish the song. That was pretty dope. 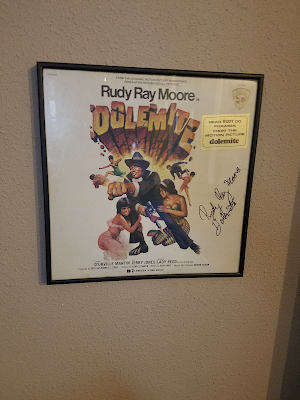 DD - That Herb Alpert piece is crazy! Where did you find that?!
DJ - I was in Oceanside at an antiques store. They had just bought a record collection  of 5000. I got there early and didn't find much, just a small stack. As I'm paying, I see a pole off in the distance with stuff hanging from it & saw the Herb Alpert thermometer. I asked the guy running the place was he selling it and how much? He said that it had been hanging there forever and that he would sell it for $20. SOLD! A lot of people want this piece. 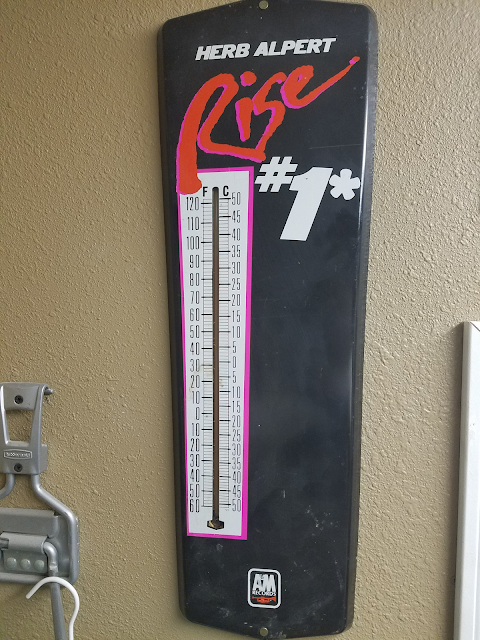 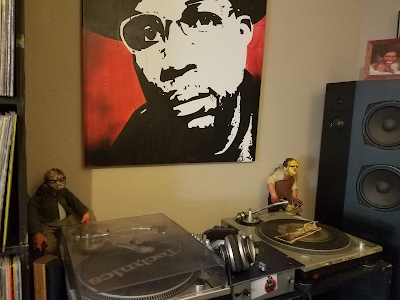 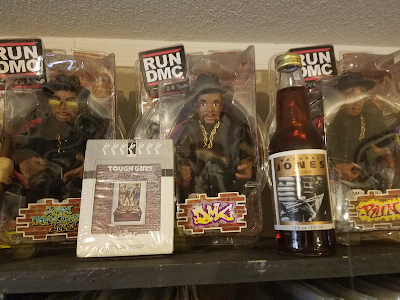 DD - You seem to find a lot of cool beverages.
DJ - Those liquor bottles were all found by chance. I have a lot of them. I got the Thelonious Monk bottle from Total Wines the first time I went there. That was the dopest thing I've ever seen on a bottle. 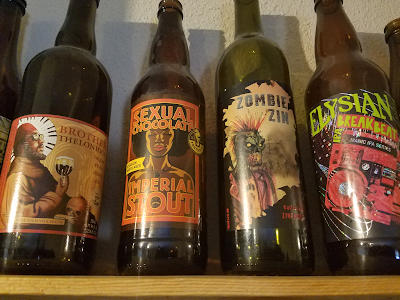 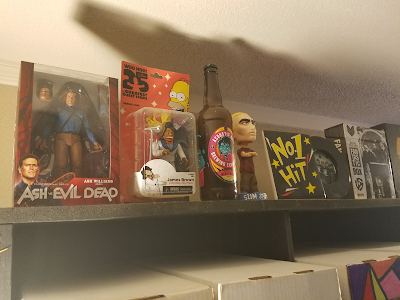 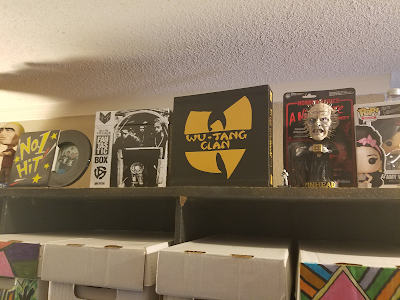 DD - You're always in a fresh pair of kicks. You collect sneakers too?
DJ - I'm not really a sneaker collector. I have a lot
of Jordans but nothing crazy. The Hieros are pretty collectable. I've only worn them a few                 times. 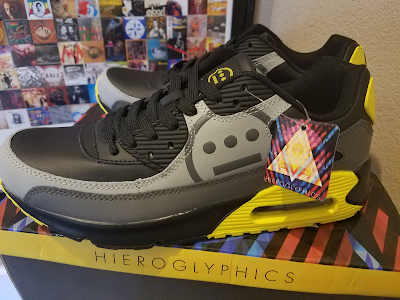 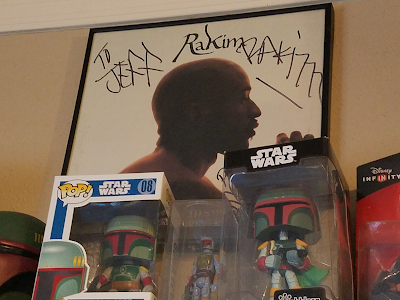 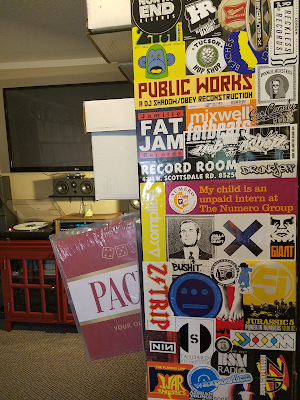 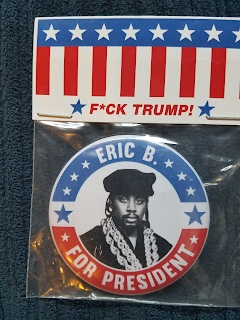 DD - It seems like everybody is buying cassettes again. Where do you find them?
DJ - 95% of all my tapes are from thrift stores. The others are mixtapes from my friends and a few I bought. 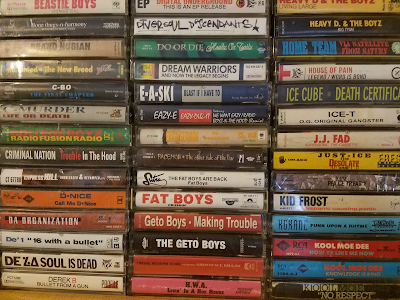 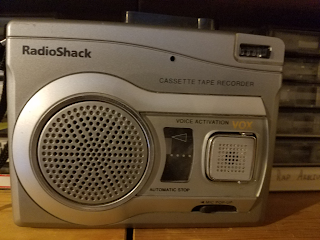 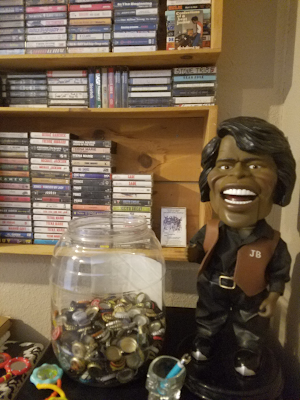 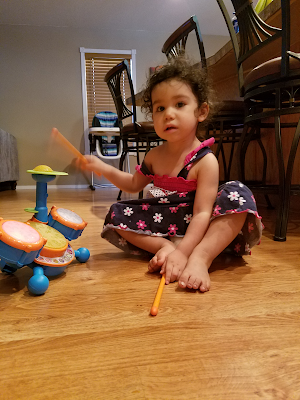