I only got to see James Brown perform once. It was 2006. Sun City hosted his last appearance in Arizona. This was a bit weird to me because Sun City is a retirement community about an hour from Phoenix. "Why would he play there?", I remember thinking.  Anyway, I was pretty excited so I along with the homie Chino D, & his wife at the time, Marcia headed to the Sundome aka MCEC to party with Mr. Dynamite himself. On the way over, Marcia and Chino get into an argument and she bounces leaving Chino to completely wild out with me, and trust me, Chino loves to wild out! This experience was different to say the least. No crazy traffic in the parking lot, no long lines, no aggressive security, everything was very smooth and laid back. The 7000+ seat facility was pretty packed but very chill. With this being a James Brown show I was surprised I didn't see anyone else I knew and most of the patrons were older caucasian couples. James reached everybody and when you consider how creative african culture is, it's not a surprise, God Made Us Funky!
When the show started, The band jamed out for 20 minutes before James ever took the stage. I have never seen such funkiness! Trust me, it was crazy! When James took the stage, well, I think you know the rest...
James passed away a few months later. I was honored to have experienced him live. I've been to a LOT of shows and I would have to put this in my top 3. 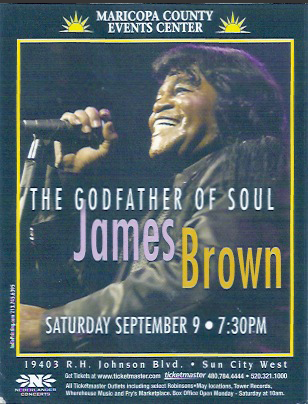 I love when there's a merch booth to buy goodies at a show and let me tell you, James had the most amount of merchandise I have ever seen. You name it, he was selling it. JB bath and hand towels, calendars, t-shirts, hoodies, posters, CD's, pencils, photos, tank-tops, jackets, women's underwear, sun-glasses, sweatbands, tour programs, caps, ties, costume jewelry, stickers, baby clothes, this guy was selling everything. He also had 2 types of JB laundry bags. Here's the one I copped. 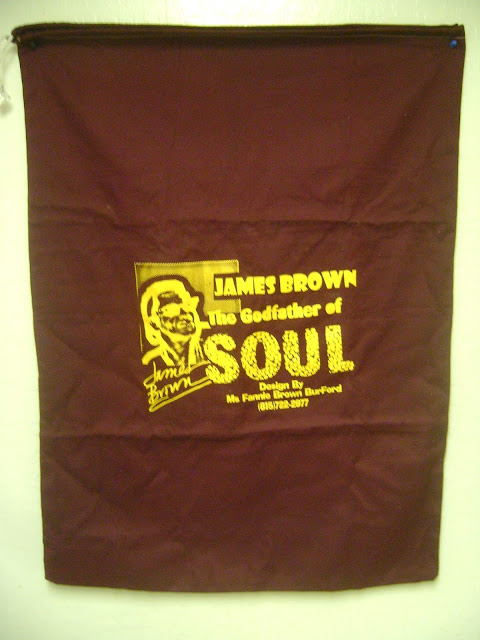 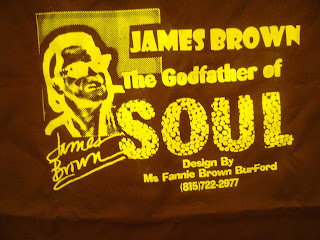