I was interviewed by Hidden Agenda Magazine back around 2008-2009. This mag focused on music, art, poetry, & pop culture. This issue quickly became a collectors item because it was full of graffiti
and street art. Here are some highlights from the interview on me. 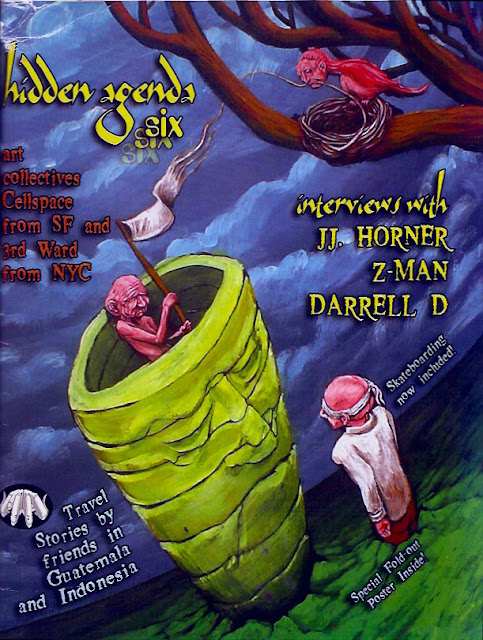 Toxic Waste-How did you get into the art of Dj'ing?
Darrell D-It started in high school. I used to be in this rap group called Prime Time with two other homies, Cosmo Chill & Whiz Doc D. Back then I was known as Delirious D. So we used to rap, you know, do talent shows, we were on TV a couple of times. As I went through high school, as I approached my senior year I realized I couldn't be a grown man running around trying to rap. So I naturally just started Dj'ing because I was already buying records. I figured that as a Dj I could still always be seen. I could always be current. I could still perform in front of people. And, because i'm playing music,I would never get old or go out of style.. I would always be current. So it was a way for me to stay in the spotlight and keep performing without being a rapper.

What about collecting vinyl?
Back in high school they were still pressing everything on vinyl. When you were buying stuff back then you had the option of buying it on vinyl or cassette. So I was already buying vinyl at the point when I stopped rappin and started Dj'ing. I already had a few crates. As far as being a collector, I remember right around the early 90's is when I first noticed. I remember going to this music store called Mainstream Music in my hometown of Milwaukee and I went to buy the new Stetsasonic "Blood Sweat and No Tears" album and the new LL Cool J ''Mama Said Knock You Out" album. I noticed 90% of the vinyl they were selling in there was gone! There was just a few bins of vinyl left. That's right around the time record companies stopped pressing so much vinyl. The CD revolution was starting to creep in and get real healthy. It was at that point that every record pressed became a "collectable". And because record companies were only doing that first run, that one pressing, that was it. So if you didn't get it when it came out, there was a good chance you wouldn't see it again. So that's when I became a collector.

How many records do you have in your collection?
I have around 100 crates.

Do you have any influences?
Early influences include three cats from my hometown. Rock Dee, Dr. B, & Fresh G. During my high school years these were the three guys I was peepin. Rock Dee was the first Dj in my town that I ever saw doing some crazy battle routines. I had only seen that crazy stuff being done on the DMC videos, and now here's this guy doing it in front of me. I didn't even know that somebody from my city had those kinds of skills. He was a great mixer plus he knew his records like the back of his hands. He could do these really quick mixes. He didn't even need to cue the record. He would just grab the needle, drop it, grab the pitch control and mix. I would ask him,"how do you do those mixes so fast?" He would simply reply,"I know my records". That always stuck with me. Because of him I can say that I always made it a point to be familiar with my records as much as possible. Then there was Dr. B. He was defiantly a creative cat. You could tell he spent a lot of time in his lab putting records together. I mean this guy could perform magic with some records! When you heard him dj, you could tell that he had put time and thought into what he was doing. And then there was Fresh G. He was the cleanest mixer I have ever heard in my life. You could ask any of the cats back home and they will tell you the same thing. He was just incredibly clean. Everything he did was just clean! Other influences would include Jazzy Jeff, Cash Money, Funkmaster Flex, Rob Swift, Tat Money,and my favorite Dj is Kid Capri.

What was it like spinnin back in the day?
Oh man! I remember back in the day when you could throw on A Tribe Called Quest Award Tour" or Prince "Housequake" and the dancefloor would go insane! You could play "More Bounce...",Planet Rock",or like "The Big Payback" or even Jazzy Jeff "Summertime" and people would lose their minds. You have your hits now but it's not the same. I miss the old days. Dj'ing is exploited now. You see Dj's in cartoons, T.V. commercials, on billboards...I've seen Dj's in Target and Sprite commercials. Anything corporate america can exploit and make money off of they will. Hip-Hop is no different,Rap is not different. Music is beautiful and I don't know what I would do without it. When I look through my record collection I'm amazed at the emotions that some of the albums give me. James Brown, Gladys Knight, Arrested Development, Teena Marie, I just zone out to the albums. It's very emotional to me.