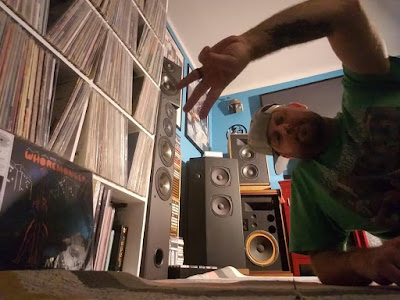 Drunk Jeff was one of the first Dj's I met after moving to Phoenix in 1998.  He himself was new to the area having just arrived from Bakersfield. Back then, you would always find Jeff draped in Adidas from head to toe, a record bag on his shoulder, and a 40oz in his hand. These days he's a family man with a huge room full of records. He turned me on to MF Doom, Freestyle Fellowship, and The Living Legends so you know I had to hit him up for his top 3 rap songs of all time. Take it away Jeff……

Ok… with all seriousness this is hard as hell to do.

A lyrical storm from Hip Hops goldern era… First time Nasty Nas was introduced to the masses. One of the greatest posse cuts of all time.

One of the first songs that was serious straight forward lyrics. Turned a new leaf in Hip Hop. The stripped down rawness of the drum machine and Jam Master Jay's cuts.

Crazy off the wall uptempo futuristic party rocker. Kool Keith was and is on one. I get hyped with the intro every time I hear it, and then the drums kick in…..man!