That One Time At Kid Capri's House

I'm a huge fan of Kid Capri. I've been collecting mixtapes for years and have always enjoyed his style of Dj'ing, my favorite type of "party-rocking" dj'ing.  I've had the pleasure of meeting him on a few occasions, like the time I interviewed him before the Def Comedy Jam show in Milwaukee back in the late 90's, or the time he rocked Club Pompeii in Tempe, Arizona back in the mid-2000's, or even the time he burned down Crotona Park at the Tools Of War show with his famous 45 set back in the summer of 2011. This latest encounter was a different story.
While vacationing in New York this summer (2018) I linked up with this record dealer that I know to pick up some funk and rap 45's he was holding for me. He took me to some of his digging spots in New Jersey and he told me that he had some vinyl that he needed to take to Kid Capri and that I could roll with him if I wanted to. Ok, cool. A few evenings later we are at Capri's crib hanging out in his studio listening to records. After a while, I pull out a 45 and tell Kid, "Here's a "break" I know you don't have". "I don't know man, I got a lot of breaks", he replies. I hand him a copy of  Kaleidoscope "Tempe, Arizona" and he throws it on the decks and clearly expresses that he's digging it. Then he stands up and says, "follow me". We walk over to a different area of his studio and he shows me his collection of 45's. He pulls out a box and proceeds to play me some of the illest breaks on 45 I have ever heard while occasionally looking over and saying,"DON'T SLEEP ON THE KID BOY, I GOT JOINTS!" After about an hour of listening to breaks he brings up the beef between Funkmaster Flex and himself breaking down the entire situation. Some of those details I can't repeat but everyone knows Kid would destroy Flex in a battle.
For the last few month's Kid has been talking about his new upcoming album called "Top Tier" which is a collection of songs produced by him featuring some of the top battle Mc's in New York. I got a chance to listen to the entire project and let me tell you, it's fire.
It's always flattering to hang out with talented individuals you admire and chop it up about the culture, especially the Dj/vinyl culture. It's amazing that no matter who you are or how big your record collection is, someone can always put you on to gems you've never heard of. 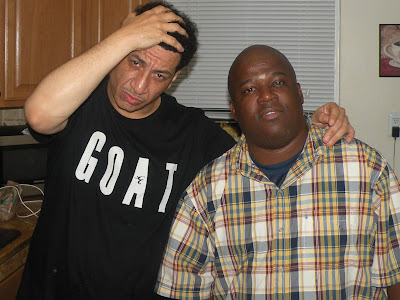