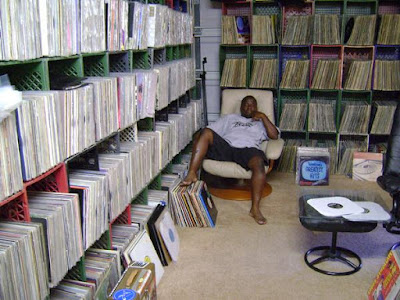 It's pretty impossible to be a serious record collector without having a lot of cool diggin stories, experiences, and finds. Most of my killer digs have taken place outside of record stores, in fact, these days it's pretty rare for me to find any deep cuts in a "brick and mortar" without paying top dollar. This is a good time to share some of these digs.

The first story I want to share in this series was pretty recent, a few months ago in New York. A record buddy of mine told me that he found this guy who was in the music business for 20-25 years. He worked for a few major record labels and acquired a lot of free records. So many in fact that it completely filled an entire two story house with a basement. I couldn't wait to get in there. The day before I was to fly home we were finally able to go over to Jamacia Queens where this house was located do some digging. Once there, the nice guy who was selling the records made it clear that everything was $5 each. Lp, 12", or 7", everything was $5 each and that he had final say on what he would sell and what he wouldn't. Also, everything was mint as most of it has never been played. I started in the basement where most of the Lp's and singles were and my buddy went straight to the attic where all of the 45's were kept. After about 30 minutes I started pulling some cool stuff, 2 copies of Mary Jane Girls "All Night Long" 12" import with the instrumental, Pharcyde Labcabin promo on colored vinyl, 10 sealed copies of Prince "Purple Rain" 12" on purple vinyl, a Black Sabbath bootleg concert Lp, some classic BlueNote jazz Lp's, lots of Duck Down Lp's & other 90's rap albums. I presented my first stack of about 75 pieces to the seller for approval. He pulled about  90% of it out that he would not sell. Bummer. The second stash I pulled was about 40-50 pieces of which about 90% he kept. This was getting old. I decided to join my buddy in diggin thru the 45 boxes. After going thru around 10 boxes all I found worth buying was a copy of Original Concept "Charlie Sez".  By then It was time to head back across town since we had other plans for that evening. I only ended up spending about $115 when I was well prepared to drop at least a grand. I was pretty disappointed I couldn't buy more and almost felt like it was a waste of time, but the guy was nice enough to gift me a mint copy of the Mazzy Star-Among My Swan Lp(he had at least 25 copies of it!) I hope to one day go back with better results.
Posted by darrell d at 2:08 PM