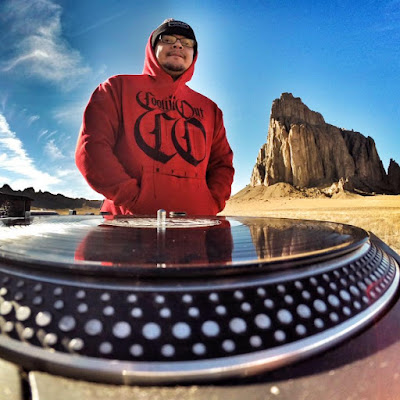 1)Darrell D-How did you get into Dj'ing?

Reflekshin-  I first got into djing from my brother Dj Tribal Touch. He was Dj when I was young so I got a basic concept of it than he moved to denver. I lived on a reservation so the basic info was scarce so I what I got was from the source magazine. than I went to high school and than I kept on buying the source over the years and used to see these articles about Djing and Djs and scratching on commons resurrection and many more albums. Then I started reading about Dj Q-bert and Mix Master Mike. So I looked up what I could on the internet and back than it was netscape. I kept looking more and more into it and I noticed Bad Boy Bill, Fat Boy Slim and than came the X-ecutioners and Dj Craze and I tried to watch what I could where I could. Back then there was no internet really or any videos online I could watch for basic knowledge of Djing. I moved home to Shiprock, NM back on the reservation and I met my friend Leo Anderson and he had records and a Vestax mixer. So I would go hang out with him when I could to learn my way around the turntables and mixer and records. And he told me that he had an extra pair of tables that I could buy so I did. And he had an extra mixer for me to use. So I borrowed a crate of records he had and would practice and practice. Back home in Shiprock I met Dj Cedro and he told me and some local bboys and graff writers to "stop by" so I did and got my first taste of spinning vinyl and breaks and seeing b-boys and b-girls dance. He also gave me my first gig in Shiprock for a local hip hop jam. And thats where I met Dj Cutting Bear now known as Poetic C and djs for U92 in Salt Lake. I also met Dj Abel now known as dj AbelRock. He played at the local bar and I would watch an take notes. Then I approched him and told him I dj too. So he told me to bring a crate of records the next time I came and I did. I had a basic knowledge of 8 bar mixes and he taught me more about mixing and EQ'ing and thats how I got into Djing in a nutshell.

2) What was the first record you ever bought?

The first record I ever bought with my own money was Micheal Jackson- Thriller. Record stores back than on rez were not available so I had to go to pawn shops or thrift stores and that was the popular record I always saw and I grew up on that album so it was a must have for my first record I ever purchased.

3) What's your top 3 favorite rap songs of all time?

Hmmmm let me see, that is a good one. If I have to pick, of all time?
1) Atmosphere- Gods Bathroom Floor has to be one of them. Just the way it sounded. Super raw and the beat was something else just the way the song started and then builds, and the lyrics.

2) Common- I U.S.E.D To Love Her. When I saw the video it made me wanna look into the different eras that hip hop went thru and what Common was talking about on the track and the history of hip hop.

And 3) Heather B- All Glocks Down. That song was soooo dope to me. Hearing that beat and a female just rip it and have flow and lyrics and her delivery. I was young and heard that on a tape and was like who is this. I've never heard anything like that before. So those would be my top 3. I'm gonna sneak in a #4 and its Nas- Lifes A Bitch. That whole track is simply dope to me. 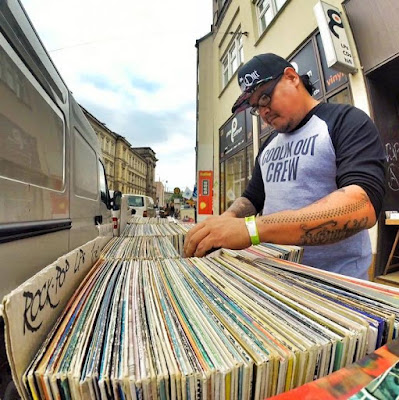 4) What dj/record collector do you admire and why?

That one is an easy one and its Dj Z-trip. Why? I've listened to him since I started djing and learned about digging. The way he plays records from word play to the blends (which is an OG term that is now called Mash-ups) and how he played rock, soul, funk, rap, hiphop, and made it just fit together very well. And pretty much how he studied music and made his own style that shaped what modern djing would come to be. Also his music knowledge is so vast it made me dig into other genres and enjoy what I grew up on and sneak those into sets when I could but know how to get out of those songs to keep the party going.

5) What's the weirdest thing that has happened to you while digging?

Hahahah, that is a good one. It was like my 5th or 6th gig and it was in Tuba City, Arizona. and my friend Kaypee booked me. He was the mobile sound/dj guy on the rez and it was a teen dance or back than we called them Jiggy gigs cause it was top 40 songs and party songs. lol. So I start djing and getting in the groove with my set, and a kid looks up to me and looks at me and says "fire" and points with thumbs up, which was kinda weird. And I was like cool i'm doing a good job. And the next kid says "fire is going up" and i'm like YEAH!. And my friend Kaypee runs up to where I was djing and says "DUDE THE SPEAKERS ARE ON FIRE! TURN IT DOWN"! I look and a speaker was literally on fire. I was like ohhhh *@#$!  So I turn it down and the dance ended and that has been a running joke. "Remember that time Reflekshin played and set the speakers on fire with his set?" Haha so that was prolly the weirdest thing that has happened to me while djing.

6) If you could meet anyone,living or dead,who would you meet?

It would definately be Prince. His passion for music. And he did it his own way whether it was right or wrong. He was his own being.

7) What's the most you've ever spent on a record?

Ummm, I never really spent a whole lot of money on a single record. If I had to pick one it would be Camp Lo- Luchini. I bought it for $45 and to me that was a lot and i've always wanted that on vinyl.

8) If you could be someone else for a day,who would it be?

I Would be Mark Ronson. He is a great Dj and has produced some excellent records and albums. His ear for funk is exceptional. His record collection is so exstensive and he has such vast range of originals to breaks, to party tracks. I would love to just go through his record collection.

My favorite mixtape would have to be Uneasy Listening by Z-Trip and DJP. Knowing that was made live and with vinyl still blows my mind for the fact the timing and BPM count had to be precise and near perfect with the mixing. and how it all flowed together it was seamless and such a ground breaker for me to keep my ear open on how to blend genres.

10) What is your favorite break?

It would be James Brown-Give It Up Turn It Loose. When the guitar comes in you know what was coming and it is time to get loose. You could top rock to it, bust out footwork, or even just vibe to it.

It would have to be Iron Maiden's Number of the Beast. When I was a kid my sister gave it to me. I loved that album but my mom hated the cover so she threw my sisters copy away and my sister Sheryl bought it for me again. The reason was the cover was pretty intense. It had Eddie who was a zombie demon looking character playing with the devil on a string which played with a human overlooking burning people or burning land. I would have to hide the tape in my moms Crystal Gayle albums in plain site kinda like that scene in Detroit Rock City when the KISS album was in I think a Carpenters album sleeve. That album made me look past the exterior and as I grew up it was such a great body of work musically. The cover is pretty demonic but the music was in no way demonic or satanic or evil. Just good music and storytelling.

Next would be to get overseas again and visit more countries and get gigs to add more stamps to my passport. 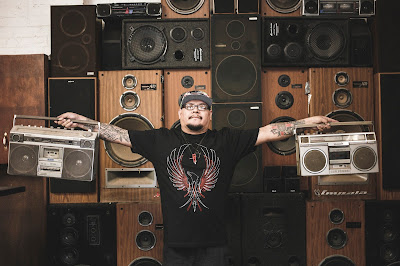