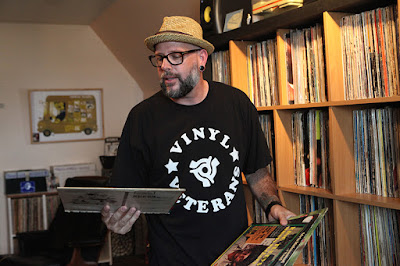 What's your fondest childhood memories?
My fondest childhood memories are the time I spent with my father's parents, my grandparents in Beachwood, NJ.  We spent quite a lot of time with them during the year and on every holiday.  My mom, my dad, my sister and I were always gathered around the dining room table eating the huge meals my grandma prepared.  There was always a lot of laughter, music, and fun.  Those memories remind me of what I want for my kids, and the importance of family.  I had my grandparents most of my life, and those are memories I hold onto dearly, ones that remind me of really good and simple times.

How did you get into DJing?
I always wanted to DJ and loved music.  My Uncle Tim (R.I.P.) took me to a K Mart and told us we could pick out records.  One of them was Eric B. and Rakim's "Paid In Full" (The Coldcut Remix), which I still have today.  An important record in my coming up.  My father was a huge soul and doo wop guy (he had a ton of acapella records), and on Saturday nights we would listen to Philadelphia's Jerry Blavet on the radio as a family and dance and carry on.  My father also brought a stereo home from Vietnam with all kinds of records: The Dells, Booker T. and the MG's, Isaac Hayes, and more.  That's where my love of music started.  Growing up, I bought all kinds of music.  Started with what my dad had, then got into classic rock, punk rock, and when hip hop hit, that's when I went nuts.  Run DMC's first record and The Beastie Boys License To Ill introduced me to sampling, etc.  When I discovered James Brown's back catalog and started to research these samples, it started to get real.  I started with Blue Note jazz and then reeally got into jazz music.  A lot of soul jazz, but I got my hands on everything I could.  It wasn't until I was in college as an on air DJ at WLFR (Stockton University) that I wanted to get into real DJing, but there was only one hip hop show.  It was called Sure Rock Holmes and The Detectives of Dance Music.  They had a DJ called Marc Asbury that would kill it.  I had heard Red Alert and Flash on the radio, but this was the first time I saw it live.  Probably around 1992.  When I wanted to play this music on my show, Sure Rock said no.  He locked all the records up in his cabinet.  This one thing propelled me to start learning and digging deeper.   About 3 or 4 years later I finally got my own set of Gemini belt driven turntables that I bought in a Burger King parking lot from a guy who upgraded to Technics (Shout out to Adam Jay aka DJ Aqua). I learned on them, then bought a set of Technics I still have today (along with a Vestax PMC05).  I originally was into turntablism, but really loved to play records through (or the break), so I went crazy digging every weekend.  My collection grew, my knowledge grew, and I started a DJ night called The Soul Circuit.  It was originally a cypher, but the club owner got pissed because the dudes  never brought any people to see them, so he asked me to play music.  I took a lot of lumps early on with that night, but we did well and I eventually met one of my all time DJ collaborators DJ Un-G.  Un-G showed me how to beat match and BPM my records, and upped my scratch game too.  We collaborated from about 2000 to 2010, when he moved to the West Coast.  He was the guy who got me to DJ in NYC in the early 2000's, and really showed me how to fine tune my DJ game proper.  I was always fond of 45s, and eventually started FleaMarketFunk.com in 2007.  Prior to that I had toured as a DJ in a national band, dug a lot while on tour, and when I stopped that, decided I wanted to share what I found through a blog.  It went from sharing what I found to now a global daily destination for diggers, DJs, artists, and producers.  Our Instagram (@fleamarketfunk) was named Top 15 record accounts to watch in December 2015 by The Vinyl Factory.  I'm proud that I put my time in and learned how to dig and DJ the right way.  I spent many nights practicing alone and getting up at the crack of dawn to fight greedy ebayers to get records.  Digging for records is still one of my greatest passions.  Sharing them while I DJ is a great feeling too.  I've met so many people worldwide through DJing and digging, I'm very thankful for it.

What was the first record you ever bought?
I was given a lot of records from my parents' friends (The Rolling Stones - England's Newest Hit Makers sticks out in my mind) at some point, but the first record I ever bought on my own was Devo's "Whip It" on 45.

What dj/record collector do you admire and why?
That's a tough one, because after working on the Dust & Grooves: Adventures In Record Collecting book with Eilon Paz I got to see a lot of collections.  I really admire Robert Perlman from Funk For The People's collection.  He has so much heat, and has recently started DJing again.  I went to his apt. one day and sat in amazement at these forty fives.  His Lp game is tight as well.  Pat James Longo aka Primitive Soundsystem has a sick collection too.  I'm a student and we are always trading information, so I still learn a lot from these cats.  Pat's jazz, funk, soul, and latin is so meticulous and deep.  Of course, my man Skeme Richards who has a tight record game, but a good nostalgia game as well, which I love.  A lot of stuff from my childhood: skateboarding, video games, bmx bikes, kung fu and horror films, Star Wars figures, Six Million Dollar Man memorabilia, plus all the Philly sports teams from the 70's and 80's.  I admire all these dudes because we have the same taste, and can relate and learn from each other.  There is no pretentiousness, and everyone shares.  That's the way it should be.  No room for record snobbery and these three are pure gentleman and solid people I call friends.

What's the weirdest thing that has happened to you while DJing?
There have been plenty of weird things that have happened to me when I DJed.  I once played The Playboy Mansion and a guy in the band was pissed at our manager so he threw his very expensive guitar pretty much at her on stage left.  That was kind of the icing on the cake though, because playing The Playboy Mansion is not glamorous at all.  Everyone thinks it is, but it's not.  We had to get there at 10am and the party was at 8pm.  We couldn't leave.  The place is a zoo too, with all kinds of animals all over in cages.  There are flamingos that are allowed to roam freely, and they shit everywhere.  So you can be just standing there and some flamingo takes a dump on your shoe.  After we stayed there all day and were set up, the party finally starts.  All these D List musicians, actors, and entertainers show up.  There are Playmates that are from ages 21 to 60+.  So it's weird.  Then Hef comes out and makes an appearance, and they prop him up, he smiles and leaves.  The food is good though.  We were there to help promote Playboy: The Mansion, a video game we had a song in.  So along with all the other bands who were there, the D Listers, the video game geeks, the weird Playmates, it's kind of strange.  Almost sad.  The famous Grotto is disgusting, and they purposely don't have towels to discourage you from jumping in.  I, thankfully did not.  The place closes at 11, and not a second after.  You need to be packed up and get out because the place is in a residential area.  One of the weirdest gigs I ever had.  Nice to say I played there, but definitely weird.

If you could meet anyone, living or dead, who would you meet?
I would love to have met King Tubby the reggae producer.  Just to watch him work his magic in the studio, and the artists he worked with would have been amazing.

Any other hobbies/interests?
I am a self taught graphic design and typography geek.  I like designing flyers, art, and making tee shirts.  I do all the design for the site (logos, photos, site banners), and have designed all the stickers and tee shirts that you see on FleaMarket Funk.  I'm also a huge English football supporter, so during the season I am glued to the television on weekends during the season when Liverpool FC play.  I like it so much I stopped watching other sports.  Football is the only sport, and I don't mean the one where you wear pads.  I love this history, the culture, and everything that goes with it.  So besides that, I also like to spend a lot of time with my wife and two boys.  They definitely help keep me grounded.

Best/Worst dj moment?
Best DJ Moment(s):
Opening up for Bad Brains playing an all reggae set and after party playing funk and soul.  HR and Dr. Know both coming up to me complimenting me on my selections.  Dr. Know asking me: "What does a white boy like you know about Cymande!" Opening up for Q-Tip at the Ace Hotel in NYC and having a great conversation and some laughs, that was definitely cool.  Also being a part of the Dust & Grooves project.  Met so many people and really am proud to have worked on it.

Worst DJ Moment:
Being on tour and the venue not having a big enough stage for me.  I had to play above the band in a balcony that housed sporting equipment like volleyball nets and poles, as well as a variety of other stuff.  It was in a strip mall in Canton, OH.  Not a highlight of my career.

If you could be someone else for a day, who would it be?
Anthony Bourdain.  I like what he does in the kitchen as well as travelling around to different places and exposing their culture and food.  Great stuff.

What is your favorite break?
Wow.  That is tough one for sure.  Let me see....my favorite breaks are Lou Courtney's "Hey Joyce", and Eddie Bo's "Hook and Sling".  Classic and timeless.

Greatest rap song of all time?
I can't just pick one.  To me, the greatest rap song(s) of all time are The Geto Boys - "My Minds Playin' Tricks On Me", Pete Rock and CL Smooth - "T.R.O.Y.", and Public Enemy - "Black Steel In The Hour of Chaos"

How can you change the world?
I can change the world by being a good role model for my kids, and continuing to promote positive music and and DJ nights where ever I play.  I just love sharing the music I dig up and hope that will inspire others, including the youth to work hard and keep a positive mental attitude (PMA) in all they do.  FleaMarket Funk has showed me that I do make a difference in people's lives all over the world.  Whether it's an article they can relate to, turning them on to new music, or just uplifting them on a bad day with one of my mixes, it makes me feel good that I can touch people's lives.  I'm just a guy who loves vinyl record and sharing my experiences, so for that I'm grateful. 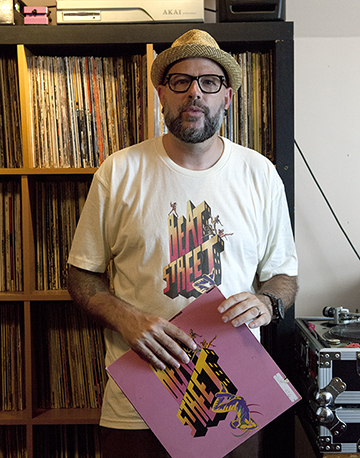