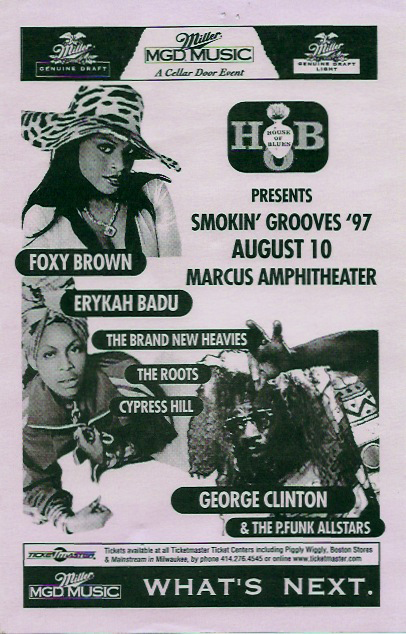 This concert was back when tours were "rock solid". It was really a great time in Milwaukee with shows, Dj'ing, and television. I and PITT, a good buddy of mine, had separate hip-hop related shows on the local public access channel, MATA 14, and were trying to interview as many dope artists as possible. One of the shows I had was an all music video show and I did video promotions from Red Ant Entertainment. Well, Red Ant worked with The Brand New Heavies who were on this SG tour so I got backstage passes through them to interview the group and that was our foot in the door to interview some of the other artists on the tour. I straight-up just walked right into Erykah Badu's dressing room. She was mad cool but didn't want to do an interview for us. It was still cool because she still did some "drops" for the show and let me tell you, she is even more beautiful up close! We moved on to Cypress Hill who was accompanied by Psycho Realm. PITT interviewed those guys and it was WILD! They later told us it was the best interview they ever did.(PITT's show was called "Mental Fitness" and was a hardcore, uncensored rap show while mine was more Dj related.) It was a similar experience when interviewing The Roots. They were bugging when they saw PITT in action. One of these days I'm going to post some of those shows. Foxy Brown for whatever reason was not on this show. The highlight of the night was backstage after the show where everyone was hangin out and I saw George Clinton off in the distance. I noticed that PITT was talking to his road manager so I walked over to see what was up. Now let's be clear,  George is a legend. I couldn't believe I was even in the same area as this dude, I mean, I could just walk up to this him and start a conversation. That was unbelievable to me. Anyway, PITT is trying to secure an interview and I'm thinking,"good luck". So George's road manager walks over to him and after a few minutes she walks back over to us and asks, "can you guys do it at the hotel at midnight?" WHAT?!!! Of course we can! So we drive across town to the Hilton and go up to his room and when we walked in, he was sitting at a table with a huge sketch pad and a ton of markers drawing. It was pretty surreal to say the least. After introductions he proceeded to select the perfect pair of sunglasses to match his outfit and then we got down to business. We hung out for 2 hours and touched on a lot of topics. It was pretty cool. Anyway, they don't do shows like this anymore.